The ILO played a very active role during the creation and the constitution of WAPES.

Since its inception, WAPES has been cooperating with various international institutions

Discover the history of WAPES in a few dates

Since 1988, the presidency has been assumed by CEOs from around the world

View the WAPES story in pictures

Do not hesitate to contact WAPES for any information request 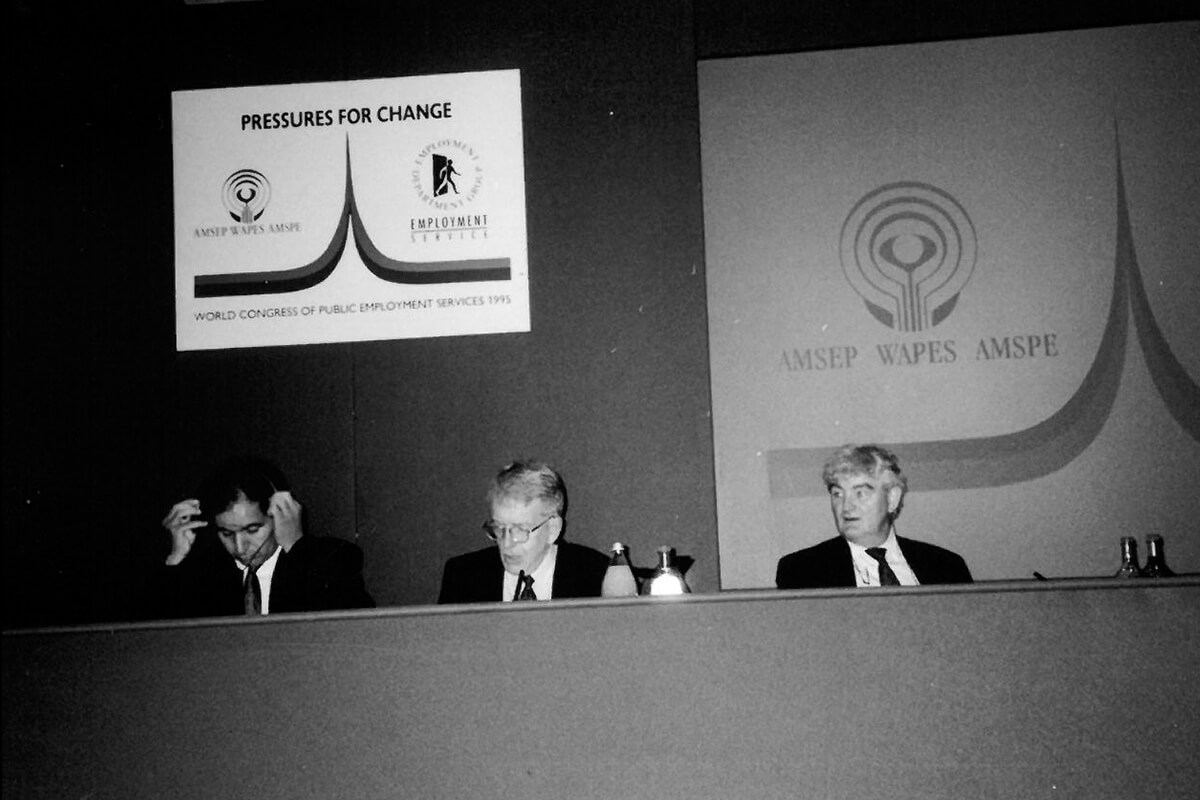 WAPES was funded in 1988 by six countries (Canada, Germany, Netherlands, Sweden and the United States), with the support of the International Labour Office (ILO).

Canada held the Presidency and Switzerland held the Secretariat.

In the 80-90s, labour markets were in turmoil. Public employment services (PES) were undergoing strong structural reforms. In this environment, WAPES was perceived as essential to encourage contacts among the diverse institutions, to promote exchanges of information and experiences, and also to improve the cooperation between more developed and less developed PES.

The ILO played a very active role during the creation and the constitution of WAPES.
Indeed, at the end of the 70s, Sergio RICCA of ILO/ADMITRA (the Administration of work branch) invested a lot of energy to find the funds necessary for the financing of a structure to help PES to meet, to know each other better and to learn from each other.
Thanks to him and thanks to the strong commitment of Lionel Dixon from the Canadian PES, the foundations of WAPES were set up.

The ILO quickly considered that WAPES could be a tool of valuation, not only in the strengthening of the daily work of PES, but also in the improvement of the international legal frame.
At the same time, Sergio RICCA had the idea to modernise the Convention n ° 88 of the ILO governing the organisation of Public employment services since the 40s.

A Movement Becoming an Organisation

The Executive Secretariat was responsible for the production of the Journal of WAPES as well as the organisation of meetings and diverse activities of the association.

In 1995, the Treasurer, Ronald VAN BEKKUM, organised the financial system which continues even today by establishing an accounting system with a rigorous control.

In 2012, during the World Congress of Seoul, WAPES became an International Non-for-profit Association (AISBL), its current legal shape.

AMSEP is now an influential organization in different regions of the world, representing the expertise of more than one million employees and working hand in hand with major international organizations.

Between the first World Congress in Niort in 1992 and the second in Stratford sur Avon in 1995, 30 Public employment services joined the Association.

Officially, WAPES headquarters were established in Geneva, the ILO having played a first-rate role during the creation of the Association.

The first President of WAPES, Lionel DIXON, managed the association from Ottawa in Canada, while the first two Executive Secretaries, Kjell SUNDBERG and Luc WAGT worked from Geneva.

In 1995, the Executive Secretariat department was transferred in Vienna; the Treasurer Ronald VAN BEKKUM worked from Rijswijk, in the Netherlands.

Five years after its creation, WAPES went through its first transition. Indeed, from a movement, inspired and pushed by individualities, it became a structured organisation.

The cooperation between WAPES and the European Commission started during the summer of 1996 (at the beginning of the European Strategy of Employment) when the EC began to be focused on the role of the politics of the labour market and the employment services, in Member States, in order to improve the employment placement of skilled workforce and the consideration of unemployment.

The convergence of interests between the EC and WAPES was orchestrated by Allan LARSSON who managed the Swedish PES (from 1983 till 1990) and by Juhani LÖNNROTH, Director of the Employment Unity of the ILO (from 1991 till 1996) and DG of the European Commission as well as Deputy Director General of Employment and Social affairs (from 2001 till 2003).

In 1996, WAPES also set up the first steps of cooperation with the OECD/DEELSA (the Direction of education, employment, work and social affairs), where Franz GUNDACKER, Executive Secretary of WAPES from 1994 till 1997 worked as consulting.

The main interest of the cooperation between the OECD and WAPES was the comparative examination of the Public employment services and the political and economic questions of transition in the countries of central and eastern Europe, included in the programs of the OECD. 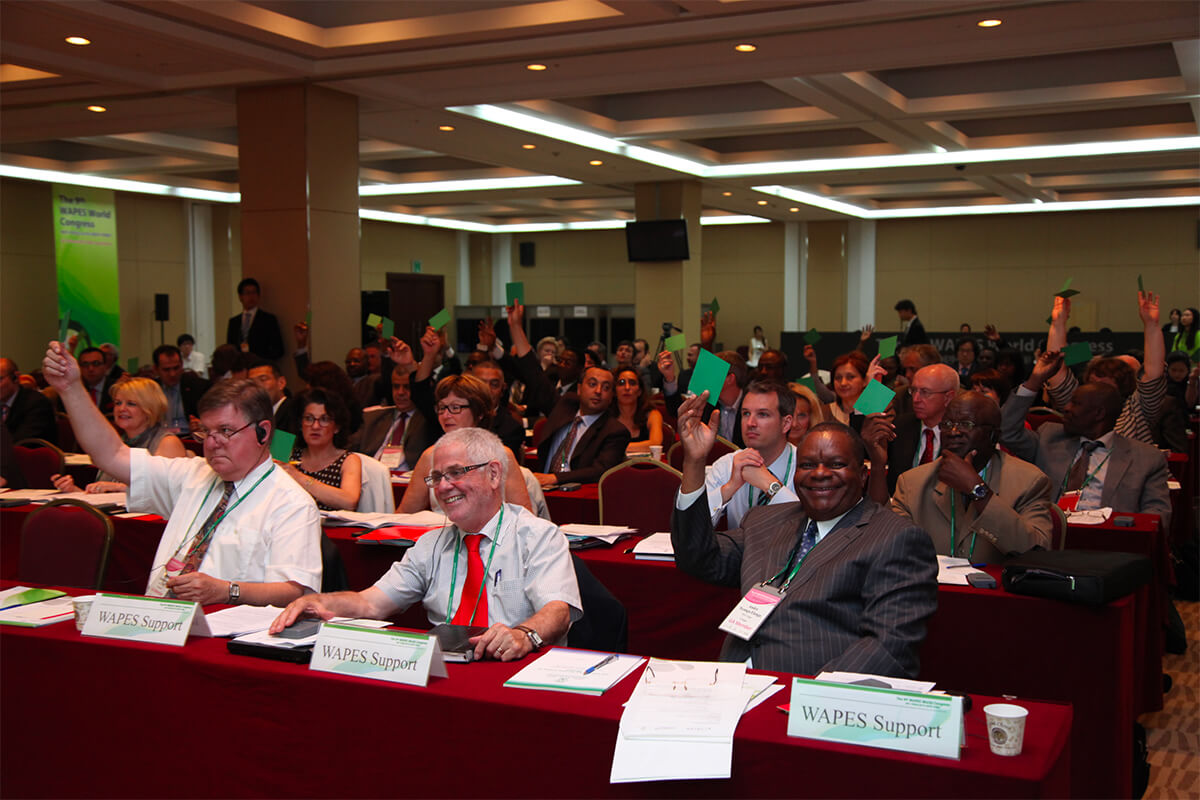 WAPES and ILO implement a database for PES

Beginning of the cooperation with the European Commission and the OECD

Creation of a working group (France, Spain, Germany, the US, Sweden, Malta and Cameroon) on the future orientation and the management methods of WAPES

Production of the website into our three work languages (French, English, Spanish)

The Executive Secretariat moves in Brussels and is hosted by Belgian PES (Actiris, ADG, Forem and VDAB)

Establishment of a working group on the Long Term Strategy of the Association.

See more
WAPES offers by its members
Collaboration with the world-wide network of PES through:
Communicating and sharing articles, publications, videos, etc. about your work. In this way, we will keep WAPES’ members informed about PES news via the website, social networks, and our newsletter, in the three official languages (Spanish, English, French).

The occasional provision of collaborators to take part in the AMSEP’s various activities contributing thereby to the improvement of good practices.

The designation by each affiliated PES of a contact person, a reference person representing his or her organisation, to set up and maintain a privileged and regular contact with the Executive Secretariat.

The provision of specialised staff (IT, economists, consultants, etc.) to participate in the daily management of the association and the executive secretariat, from Brussels or from the home country, over long or short periods of time.

The transmission of information by PES members to all their collaborators and staff, within their own institutions but also to their partners to publicize WAPES and its work locally, nationally, and internationally.

Fumie HIGASHIRA
Fumie joined the secretariat during September 2021. Fumie joined WAPES in September 2021. She is a seconded official from MHLW (Ministry of Health, Labour and Welfare of Japan) to WAPES, as a coordinator of Japan-WAPES Joint Project.

In this project (2021-2023), she works with Cambodian PES (the National Employment Agency). She is going to develop a performance assessment framework based on the recommendation report of the 1st phase of the project. She has been engaged with career guidance measures to help practitioners including those in the PES, as well as planning training sessions in the International Training Center of ILO (2013-2015). She also has a Master of Arts in Lifelong Learning and Career Studies.

She enjoys flower arrangement (Sogetsu school of ikebana) and is looking forward to visiting museum of fine arts and ballet spectacles in Europe.

Thierry HUORT
Thierry joined the secretariat at the beginning of January 2020 .

Thierry HUORT has been seconded by Pôle emploi, the French public employment service, to WAPES since January 2020.

For more than 35 years in the employment service, he has held various positions from employment consulting to management to human resources project management.

Since 1997, Pôle emploi has also entrusted him with missions in the context of international cooperation. In this respect, he has been involved in various countries/regions: Albania, Algeria, Burkina Faso, Cameroon, New Caledonia and Morocco, for which he led a Morocco-European Union institutional twinning project for the benefit of ANAPEC (Morocco PES) in cooperation with Arbetsformedlingen (Sweden PES) and GVG (Germany Assoc.).

Born in Algeria, he lived in Ivory Coast until the age of 18. After initial technical studies (Electronics), and resuming on-the-job studies, he holds a University Diploma in Educational Sciences (DUPHA “Human Potential and Learning”).

Hilde d'AUBIOUL
Responsible for the organization, framing and deployment of the SamPES project.

Hilde d’Aubioul joined WAPES in July 2019. She has been seconded from VDAB, the Belgian Public Employment Services of Flanders.

In July 2004 she started at VDAB as a mediator for job seekers. In October 2013 she switched jobs and started as Strategic Policy Advisor at the central office of VDAB. In this position she fulfilled a wide range of tasks and responsibilities. Among others things, she contributed to the development of the long-term strategy of WAPES and was a TAIEX speaker for the European Commission.

Prior to her career at VDAB she took on various positions in different sectors: plant virus researcher, banking etc.

Hilde has a master of science in Educational Studies and a bachelor in Biochemistry.

In her free time she likes to travel an meet other cultures .

Amada HERNANDO-PASCUAL
After studying translation and communication, Amada worked in various organisations and companies around the world, including the last 2 years abroad in a tourist office in a beautiful remote village in los Picos de Europa, Asturian mountains.

Back in Belgium, she has been working for almost ten years at the Permanent Representation of Belgium to the EU, in the Migration and Home Affairs Service

In March 2020, a week before the start of the Covid-19 health crisis, Amada joined the Executive Secretariat team with great pleasure, as assistant to the consultants.

Mother of 2 grandchildren, passionate about foreign languages, naturopathy, and music of all kinds, she spends her free time learning, perfecting and sharing her knowledge or discoveries, and working as a volunteer for the smooth running of a Brussels concert hall.

A Spanish national, her working languages are Spanish, French, and English (Swedish in learning process).

Initially Pierre-Alain went for a three-month internship in Venezuela for his degree in Communication. However he decided to stay in this country for 12 years.

In 2014 he returned to Belgium. Developing a passion for audiovisual and cultural work, Pierre Alain first collaborated on the creation of a community television in a popular district of Maracay in Venezuela. Then together with his Venezuelan wife, he created a non-profit Socio-Cultural organization called “Fundación Socio-Cultural AUTANA” of which he was the director for 10 years. The Fundación organizes free workshops for audiovisual production, films and documentaries projections in popular neighborhoods called “barrios”, produces video reports and helps other organizations to emerge.

Pierre-Alain also holds a degree in education with mention in Cultural Development from the Experimental Nacional University “Simón Rodríguez” in Caracas, Venezuela. In his last position he worked for two years as a communication expert for the National Experimental University for Security “UNES” for the Aragua and Carabobo regions in Venezuela.

Pierre-Alain spends his leisure time with his two children helping them discover the Belgian culture.

Jacqueline is journalist by profession. She has worked for over 20 years in various organizations both nationally and internationally such as The Voice of Women association, Food for the Hungry International (FHI), Young women’s Christian Association (YWCA). She fulfilled respectively different functions such as administrative and financial assistant, management assistant and general secretary.

In June 2012, as part of her training in secretarial work, Jacqueline did an internship at WAPES, where she supported the Executive Secretariat with preparations of the World Congress in Seoul.

In addition to her mother tongue, Jacqueline speaks and writes English and French.

Jacqueline is mother of 4 children, 2 girls and 2 boys.

Eve-Marie MOSSERAY joined WAPES last August 2018. She has been assigned by SYNERJOB and seconded from FOREM, the Belgian Public Employment Service for French-speaking Wallonia.

For the last 12 years, she has held the position of head of the training centers of Walloon Brabant (training for jobseekers and workers) with a wide representation of the activity sectors. Prior to this, she held various positions in banking, cultural and temporary employment sectors.

Eve-Marie has a master in Political Science and International Relations. She is interested in culture and she likes to go hiking in her free time.

WAPES offers for its members

Solidarity among PES to provide answers to the challenges they face

Connection and networking between the different PESs

Linking up users with PES

Pooling and sharing of good practices, benchlearning, with, notably, the SamPES project